Looking back on a successful anniversary year

2016 was dominated by our 25 years of VASCULAR INTERNATIONAL (VI) anniversary.

After the great celebration in Pontresina, where we spent an unforgettable evening, things continued at one go.

Our latest model “the-vi-box” was successfully launched and received a recognition award of the Central Swiss Chamber of Industry and Commerce. We managed to take a large step in organising our increasingly complex logistics. In spring, we moved into our new logistics centre in Kerns. With the space now available, we gave our training infrastructure a complete overhaul. With Pierangelo Beroggi and his brother Paolo, we also upgraded our staff to manage the increasing transports to the course locations and the shipment of the models and inlays even more efficiently.

The anniversary year’s impetus was also transferred to the courses. See a list of the courses held for the first time this year: 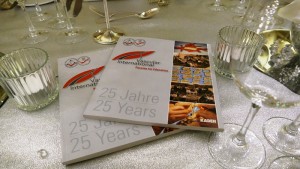 As the great highlight of the anniversary year, we finally managed to summarise our history in a book – thanks to the tireless commitment of Henning Eckstein and diligent co-authors. It traces 25 years of VASCULAR INTERNATIONAL from the first ideas and workshops to today’s professional organisation.

Our sincere thanks go to all those who made this successful year possible: To the course instructors and tutors who still make themselves available free of charge; to the industry partners who provide our organisation with material, financial and moral support; and finally, to our managing director Toni Meile and all course participants, whose enthusiasm inspires us to continue along this path.

With kind regards and the best wishes for relaxing holidays and a successful New Year!